"Fair Trade For All"

Joseph E. Stiglitz is University Professor at Columbia University and teaches at the Columbia Business School, the Graduate School of Arts and Sciences (in the Department of Economics) and the School of International and Public Affairs. A graduate of Amherst College, he received his PHD from MIT in 1967, became a full professor at Yale in 1970, and in 1979 was awarded the John Bates Clark Award, given biennially by the American Economic Association to the economist under 40 who has made the most significant contribution to the field. He has taught at Princeton, Stanford, MIT and was the Drummond Professor and a fellow of All Souls College, Oxford. In 2001, he was awarded the Nobel Prize in economics.

He was a member of the Council of Economic Advisers from 1993-95, during the Clinton administration, and served as CEA chairman from 1995-97. He then became Chief Economist and Senior Vice-President of the World Bank from 1997-2000.

Stiglitz helped create a new branch of economics, “The Economics of Information,” exploring the consequences of information asymmetries and pioneering such pivotal concepts as adverse selection and moral hazard, which have now become standard tools not only of theorists, but of policy analysts. He has made major contributions to macro-economics and monetary theory, to development economics and trade theory, to public and corporate finance, to the theories of industrial organization and rural organization, and to the theories of welfare economics and of income and wealth distribution. In the 1980s, he helped revive interest in the economics of R&D.

His work has helped explain the circumstances in which markets do not work well, and how selective government intervention can improve their performance.

Recognized around the world as a leading economic educator, he has written textbooks that have been translated into more than a dozen languages. He founded one of the leading economics journals, The Journal of Economic Perspectives. He is the author of The Roaring Nineties (W.W. Norton) and his book Globalization and Its Discontents (W.W. Norton, June 2001) has been translated into 28 languages and is an international bestseller. He has recently published a new book, with co-author Andrew Charlton, Fair Trade For All: How Trade Can Promote Development (Oxford University Press, 2005). 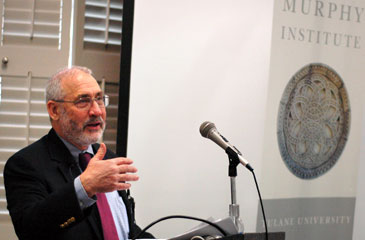 On March 10, 2006, Joseph Stiglitz presented his most recent views on the ramifications of unfair trade, and the effect of unfair trade policies on developing countries. An impressively large audience turned out to listen to his comments in connection with the release of his latest publication Fair Trade For All – a book that is certainly timely given current concerns about trade and development. Prof. Stiglitz offered critical accounts of a wide variety of topics, including domestic issues affecting U.S. trade policy, like protective subsidies for the cotton industry, as well as an array of international trade issues. He considered questions relative to China’s impact on the global market, and echoed many of the views recently advanced by Thomas Friedman in his assessment of the current and near-future role of the rapidly expanding economies of China and India. His presentation generated a number of queries from the audience and it was clear that all those in attendance were both impressed and stimulated by the presentation and subsequent discussion. After the lecture, Prof. Stiglitz signed copies of his new book and graciously answered questions raised by several political economy majors. The Murphy Institute was honored to have Prof. Stiglitz as the Yates lecturer for this year. His presentation was a fitting culmination to a difficult academic year, and a reminder of the role played by the Murphy Institute in promoting the advancement of important academic events on the Tulane campus. The Yates Lecture continues to serve as the benchmark against which all important academic events on the Tulane campus should be measured.